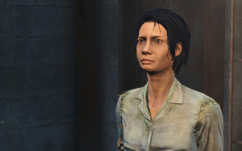 Myrna, referred to as Crazy Myrna by Piper, is an anti-synth conspiracy theorist and the proprietor of a junk shop operating in Diamond City in 2287. She and her robot assistant, Percy alternate between shifts, the former taking the day shift and the latter taking the night shift.

The proprietor of the junk shop known as Diamond City Surplus, Myrna is a gifted tinkerer with a penchant for restoring old robots. She suffers from a strong paranoia of synths, and as result is an outspoken anti-Institute conspiracy theorist. She is highly suspicious of synths shopping at her store, let alone browsing her merchandise. Myrna has a known habit of periodically accusing her customers of being synths while behind the counter, leading them to leave in frustration.

In response to the rumors of kidnappings by the Institute, Myrna has reprogrammed Percy, an old Mister Handy unit she had salvaged and restored, to handle the night shift so that she can safely sleep at night, due to her fear of the "synth propaganda" that perpetrates at dusk.

Myrna had secretly put together a plan to lead a movement to persuade the mayor to pass legislation prohibiting suspected synths and Institute agents from visiting Diamond City.[1]

Retrieved from "https://fallout.fandom.com/wiki/Myrna?oldid=3292915"
Community content is available under CC-BY-SA unless otherwise noted.