“Will you use it for spare parts, or riding in your spare time? Up to you, you're the Overseer. Send Dwellers to get one!”

My Metal Pony is a single-stage overseer quest in Fallout Shelter.

The quest takes place in a standard factory setting, randomized with a cellar and around four overground floors. The player's dwellers will mostly face minor critters such molerats and radroaches. Once they progress to the top they will find a raider boss accompanied by a normal raider who just found the Giddyup Buttercup. The ensuing conversation has no peaceful resolution, so a fight to the death is necessary to finish the quest.

Although this is a low-requirement quest, it is possible, although very rare, to randomly get a drop of a legendary junk item, including a Giddyup Buttercup. This will however not fulfill the quest objective, and the raiders and intended Giddyup toy must be reached and dealt with.

This quest's name is a reference to the Hasbro owned property My Little Pony which originally came out in 1982 as a line of toys. 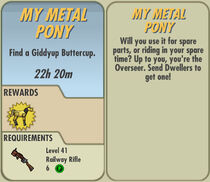 Rewards
Add a photo to this gallery
Retrieved from "https://fallout.fandom.com/wiki/My_Metal_Pony?oldid=3370108"
Community content is available under CC-BY-SA unless otherwise noted.