The Power of the Atom
Holy Water

Fallout 3
“Yes, I believe this place could do with a bit more in the way of decoration. Speak with Moira Brown at Craterside Supply here in Megaton. She has quite a selection of items to enhance your living space.”— Wadsworth

My Megaton house is a residence in Megaton which becomes available if the Lone Wanderer disarms the Megaton bomb during The Power of the Atom quest. Sheriff Lucas Simms gives the Lone Wanderer a key to the house as a reward for disarming the atomic bomb in the center of Megaton. If Simms dies during or before the aforementioned quest, his son Harden Simms will give the key instead. At this point, the "Empty House" is renamed as "My Megaton house." The house includes a main floor lounge, a very small kitchenette, an upstairs landing, an unnamed room that Wadsworth often spends time in, and a bedroom.

The Lone Wanderer has access to a robot butler, named Wadsworth, who is able to tell jokes and supply purified water (Wadsworth may give up to five bottles, then it takes one week for him to refill). Wadsworth can also, upon request, style hair and explain what the home improvements are used for. If the My First Infirmary is purchased, Wadsworth will remind the Lone Wanderer to use it if they are injured. Sleeping in the bed on the second floor of the shack (or the heart-shaped bed if the Love Machine theme was bought from Craterside Supply), grants the "Well Rested" effect (+10% XP bonus) if rested for no less than 8 hours. There are places to store an infinite amount of items in the house, including: two lockers, a refrigerator, a desk and a filing cabinet. There is also a bobblehead collector's stand for displaying Vault-Tec bobbleheads.

After becoming a resident of Megaton and the owner of a new house, the Lone Wanderer can enhance their new home by adding improvements, which can be purchased from Moira at Craterside Supply.

Improvements include an infirmary, jukebox, laboratory, Nuka-Cola vending machine and a workbench. All of these improvements add new functionality to the house, which ranges from being able to be healed instantly for free, to being able to listen to music without using the Pip-Boy radio.

For enough caps, Moira can change the decor from a rundown shack to one of the following themes: Raider, Wasteland explorer, Vault, Science, Pre-War and Love Machine. A theme cannot be sold back, but it can be replaced by buying a new one. To obtain skill books from the themes, buy the Science (Nikola Tesla and You), and the Love Machine (Lying, Congressional Style) themes, since they are the only two that offer this extra bonus. These skill books can only be obtained once, however. Themes will displace any items that may have already been placed outside of item storage such as lockers for storage/decoration. 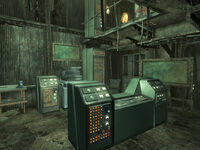 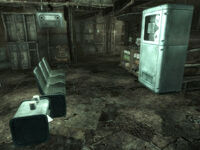 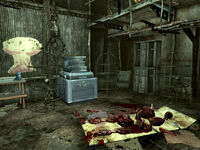 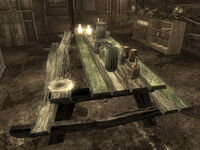 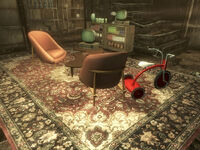