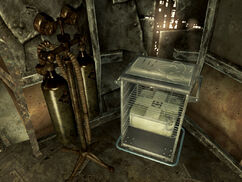 “An innovation from Med-Tek, the My First Infirmary will automatically diagnose and treat any injury you might sustain. It will also make any of the pesky rads you've accumulated in the Wasteland vanish instantly.”— Wadsworth/Godfrey

My First Infirmary is a housing improvement that the Lone Wanderer can buy for their Megaton house, or for their Tenpenny Tower suite. Its value is initially at 1,199 caps. It has three options:

The My First Infirmary's first two options are already taken care of by the bed in either the house or suite (the bed will also result in the Well Rested benefit). Its real value comes from its ability to reduce radiation levels to 0 on demand, without having to visit a doctor and pay the typical 100 caps, or use RadAway. As such, it proves to be a somewhat useful valuable commodity.

The My First Infirmary also includes on top a scalpel, tweezers, and surgical tubing.

It looks like a normal medical box encountered throughout the game.

Retrieved from "https://fallout.fandom.com/wiki/My_First_Infirmary?oldid=3141334"
Community content is available under CC-BY-SA unless otherwise noted.