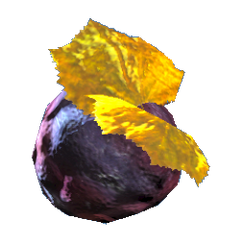 Mutfruit is a consumable item in Fallout 4.

Mutfruit is a small purple fruit that grows on small mutfruit trees that bear yellow leaves. The first syllable is pronounced as "mute" as in a mutated fruit.

One mutfruit is required to plant a single tree in dirt terrain in any owned settlement.

Additionally, wild mutfruit plants located within the range of a workshop can be scrapped for one wild mutfruit.

Retrieved from "https://fallout.fandom.com/wiki/Mutfruit_(Fallout_4)?oldid=3481373"
Community content is available under CC-BY-SA unless otherwise noted.