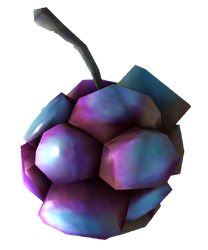 Mutfruit is a food item found in Fallout 3.

Rivet City scientists are capable of growing fresh, radiation-free fruits and vegetables, so it's clear that fruit-growing climates can be replicated with the proper technology.

Its structure is mainly a purple fruit that grows on a stalk, meaning that it would have grown on a tree. It can restore some of the player character's Hit Points, but also gives them a small amount of radiation.

They can be found by many traders in the Capital Wasteland such as Jenny Stahl of the Brass Lantern in Megaton and Gary Staley of Gary's Galley in Rivet City.

Retrieved from "https://fallout.fandom.com/wiki/Mutfruit_(Fallout_3)?oldid=3224780"
Community content is available under CC-BY-SA unless otherwise noted.