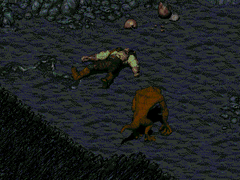 Take the holodisk from the mutant
“This holotape looks like it was set to record audio data from a radio. Use the tape to transfer the information to your PIPBoy.”

Mutant transmissions is a holodisk in Fallout.

It can be found on the dying mutant in the deathclaw's lair, that Slappy can take you to for the quest to find the missing caravans.

Message sent: Base, this is Scavenger Team two come in. Over.

Message received: We're reading you loud an clear, go ahead. Over.

Message sent: We've collected four males, two females, and their supplies from the caravan. They're not too badly contaminated. Tell the Lieutenant that we're sending them ahead, they might be able to survive the process. We're going to wait here for a few more days to try and intercept another caravan. Over.

Message received: Roger that. Were any casualties accrued during the acquisition? Over.

Message sent: Negative. Another clean sweep. Base, also tell Scavenger Team one that we've run across the same problem they had. One of our scouts did not return from his perimeter patrol. A few of our other scouts reported that there was something big and fast seen near our camp last night. I'll be checking it out personally at 0600 hours tomorrow morning. Over.

Message received: Copy. We'll be awaiting your report. If possible, try to capture it. The Master would be very pleased. Over.