Mutant hounds are dogs that have undergone a major mutation after being contaminated by the Forced Evolutionary Virus. Usually, they are accompanied by super mutants although wild packs can be encountered in Appalachia.

Mutant hounds will alert if enemies approach too close to them. In this case, they will attack. Their bite can inflict serious damage on low-level player characters, and luminescent variants inflict a large amount of radiation.

A mutant hound that has become inundated with radiation to the point that it emits a bright green glow.

A mutant hound infected with the Scorched Plague. All regular hound variants have a corresponding Scorched variant with the same stats, abilities, and items. They may become Scorched when attacked by scorchbeasts or the scorchbeast queen, becoming allies with other Scorched creatures. Some may spawn in already Scorched, and will turn on their super mutant masters. 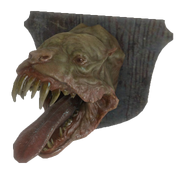