Fallout 4
“Super Mutants are often accompanied by Mutant Hounds, monstrous dogs that are just as dangerous as their masters.”— Fallout 4 loading screens

Mutant hounds or FEV hounds are creatures found in the Commonwealth and are present on the Island in 2287.

These are dogs that have undergone major mutations from being exposed to the Forced Evolutionary Virus. Usually, they are accompanying super mutants. They may have been created in the FEV lab of the Institute, along with the rest of the super mutants that are seen throughout the Commonwealth.[1][Non-canon 1][Non-canon 2]

Mutant hounds are usually several times bigger than normal stray dogs and mongrels. The modification imposed on their bodies by the Forced Evolutionary Virus is similar to the one the super mutants went through: increase of muscle mass, depigmentation of the skin to a greenish color and complete loss of body hair.

Mutant hounds will alert nearby mutants using a very loud howl. Their bite inflicts radiation damage. They normally attack in packs of up to three. They can also be tamed if one has the Animal Friend perk and be captured with Wasteland Workshop installed.

Glowing mutant hounds share the same appearance as the basic variant but they have more hit points than their regular counterpart, and can deal a decent amount of radiation damage with a bite. As such, they still emit a loud howl to alert other super mutants of a threat.

Mutant hounds can be found accompanying super mutants throughout the Commonwealth as well as the Island.

Mutant hounds appear in Fallout 4 and its add-on Far Harbor. 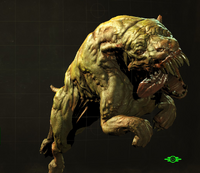 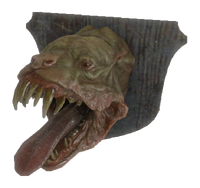 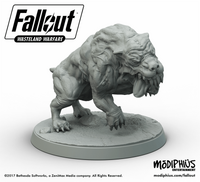 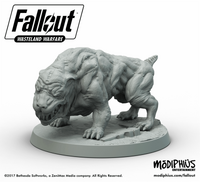