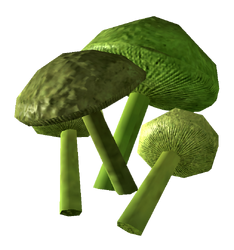 While cave fungus is normally grown in caverns as a reliable healing reagent, some caverns over the years have become irradiated. This resulted in the mutated cave fungus, which can be used to make black blood sausages and other consumables.

Whereas a normal cave fungus would reduce radiation, mutant cave fungus adds radiation when consumed and has an appropriate green glow. This item is needed to create nightstalker squeezin's, thick red paste, black blood sausage and Battle Brew. They respawn in the named locations every 72 game hours (3 game days).

This is a list of fixed non-random places to find mutant cave fungus (37 total).

Retrieved from "https://fallout.fandom.com/wiki/Mutant_cave_fungus?oldid=3373173"
Community content is available under CC-BY-SA unless otherwise noted.