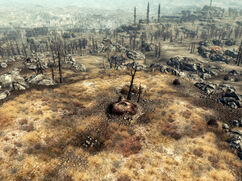 The musty caverns is an unmarked location in the Capital Wasteland, located east of Mason Dixon Salvage.

It appears as a regular ant hill entrance. The interior layout is almost identical to the warren. It features several long, narrow tunnels that are dotted with cave fungi, among other things. At the end of the tunnels, there is one round room with two corpses. The interior has waste piles which may contain ant nectar, and a few lootable corpses with common items.

Outside of the cave is a respawn point for enemies, mainly giant ants, radscorpions as well as deathclaws at higher levels. Immediately inside the cavern, there are also giant soldier ants.

The musty caverns appear only in Fallout 3.

Add a photo to this gallery
Retrieved from "https://fallout.fandom.com/wiki/Musty_caverns?oldid=3315520"
Community content is available under CC-BY-SA unless otherwise noted.