Fallout 3
“Ha! Man's monument to his own demise. All the garbage they displayed in there is the reason half of the world was blown to shit. That shithole is located just off The Mall. You know, that huge space in the center of the city in front of the Capitol.”— Three Dog

The Museum of Technology is a building in the ruins of Washington, D.C., on the southern side of The Mall. It is only a short distance away from the eastern Museum station metro exit.

A grand museum, home to many iconic exhibits, vehicles, and attractions that educated and entertained tourists before the Great War. It is now home to super mutants.

The museum is one of buildings in the National Mall. The structure is crumbling, with pillars falling out of place and visible holes in the roof. In the years following the Great War, the attractions have sustained significant damage.

Several exhibits can still be found in the museum, including several airplanes. The Wright Flyer I lays in pieces on the floor just inside the museum entrance. Deeper inside the museum, more airplanes can be found. Hanging from the ceiling in the same room as the Virgo II lunar lander is a P-51 Mustang. In the west wing of the museum, partially buried in the rubble is an unnamed model of fighter jet. Back in the atrium, a microfusion cell trap is located inside the first stall of the men's bathroom. Inside the toilet's water tank are an additional 35 cells.

Another large exhibit is a Vault-Tec Corporation demonstration vault model on the second floor. It serves as an example of what vault life would be like and displays the various technologies used by Vault-Tec in constructing the vaults. It consists of a hallway with windows that show examples of different vault sections. The rooms of the exhibit include a bedroom, kitchen, and classroom. One of the displays in the vault exhibition promises that a self-cleaning floor means dwellers "will never have to sweep again." Farther down the corridor is a skeleton holding a broom near a cleaning cart. Most of the containers within the Vault-Tec demonstration vault are functional containers, sometimes containing loot.

Next to the windows are speakers which play recorded messages. Several gun and armor exhibits were scheduled for 2078, including laser pistols and power armor and antique weapons.[1] A sub-basement with three fusion generators is described in the maintenance coordinator's notes, but cannot be found in the museum.

Two exhibits on the ground floor near the Delta rocket celebrate the first human space flight of Carl Bell as taking place on May 5, 1961 in the space capsule Defiance 7. There is a control room to the south, up the southernmost stairs in the back. Its windows are visible from the entry hall, behind a wire mesh installed by Derek Remmings, the maintenance coordinator in 2077. The maintenance computer to the east has a list of log entries by Remmings, detailing office politics from long ago.

The museum also contains a malfunctioning Copernicus Planetarium in the northern section of the west wing. The program will begin playing when the Lone Wanderer enters the room but eventually malfunctions and enters a continuous loop. Through the planetarium there are three terminals with "Far Out Space Facts." There is an office on the east side of the room containing the terminal of a pre-war researcher, a Nuka-Cola Quantum, and a locked gun cabinet containing various weapons and ammo. Upon exiting the office two super mutants will spawn in the planetarium entrance. 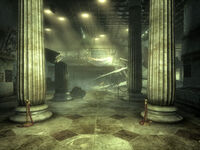 Poster for the museum 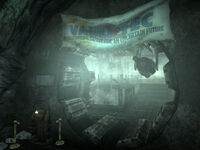 Entrance to the vault display 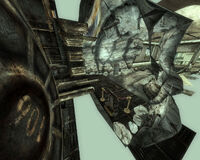 A view on the door using tcl 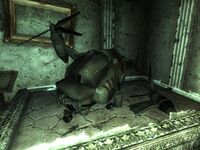 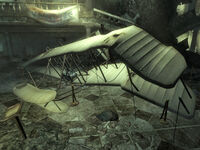 The Wright Flyer I airplane 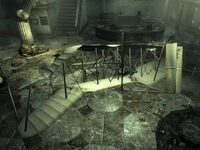 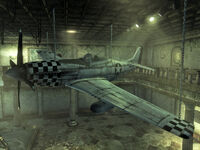 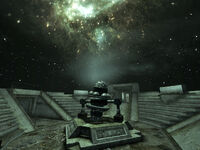 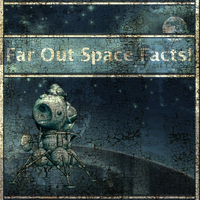 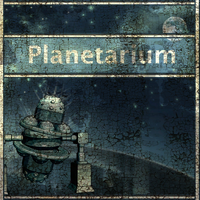 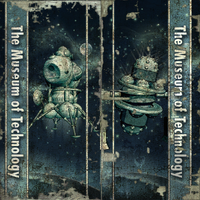