“Some of them went crazy. Some of us just accepted it. After a while, other ghouls would find their way in here and Underworld just sort of grew.”— Carol

The Museum of History or Museum of American History is a former museum turned ghoul settlement located in Washington, D.C. in 2277.[1]

The Museum of History can be accessed through the metro. One route is via Anacostia Crossing, following the tracks into Museum Station. The museum is on the north side of the Mall, north and a little east of the Washington Monument. Its east and west wings straddle the Museum station western exit. Willow, the Underworld sentry, can be found patrolling the area between the metro station and the museum entrance.

The structure itself is relatively undamaged, but most of the exhibits have been destroyed or ruined. A T-Rex skeleton and woolly mammoth are found at the entrance, which also serves as the entrance to Underworld, a city of ghouls. The museum also houses a number of artifacts of Abraham Lincoln such as Lincoln's repeater and hat.

The museum - except for Underworld - is infested by feral ghouls, glowing ones and reavers. With the Broken Steel, a ghoul named Griffon can be found here selling The Amazing Aqua Cura! which is Aqua Pura with a "secret ingredient."

Fawkes will be waiting in the lobby if one decides to free him from Vault 87, without recruiting him as a companion or if dismissed.

The Museum of History appears only in Fallout 3.

T-Rex and mammoth on display 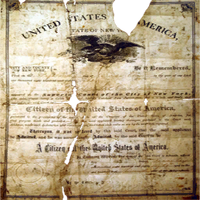 Inside view from Channel 8: Washington, D.C. of the Prepare for the Future teaser site 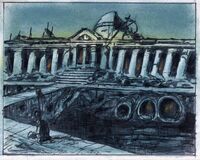