Fallout 4
“The Concord Museum of Freedom was a popular tourist destination before the war, and featured historical exhibits ranging from the American Revolution, all the way up to the Battle of Anchorage.”— Fallout 4 loading screens

The Museum of Freedom is a building within Concord in 2287.

A popular tourist destination before the Great War, the Museum of Freedom was dedicated to remembering and honoring American soldiers who fought across several conflicts spanning from the American Revolution to the Battle of Anchorage.[1] At the time of the Great War, the chief curator was Harold Nash, and Megan Hayes served as a tour guide.

The exhibits focused on the Revolutionary War, mannequins used to depict the "Redcoats." In addition, an automated audio tour and music provided background information for the exhibits by way of quotes and sound effects.[2] At one point, an exhibit featuring the Battle of Anchorage was planned but ultimately canceled due to a limited budget.[3]

When the Great War occurred, most of the staff fled the museum, with the exception of Megan Hayes.[4] A vertibird crashed through the roof as a result of the bombs, with the surviving soldiers appearing panicked, abandoning the wreck and leaving a suit of T-45 power armor behind.[4] In 2287, a group of wastelanders led by Preston Garvey traveled through Concord and were attacked by raiders led by Gristle. The group took refuge in the Museum of Freedom.[Non-canon 1]

From the main entrance, one enters into a large room. At the far end of the room is a wall, an Advanced locked gate and a mural painted across the upper half, looking upwards from here one can see the propeller of the crashed Vertibird. On the right of the room is a corridor leading to the Revolutionary War display. Upon entering the corridor the lights will switch on and the demonstrations audio track will begin.

Passing through the corridor leads to a mannequin-filled display. The mannequins facing towards the northwest of the room depict civilians facing soldiers towards the southeast. The following room is dressed as a ship's deck with crates strewn across the room and a partial ship's mast, roughly central in the room. The final room before coming out behind the mural is lined with empty display cases and a single mannequin fallen against the radiator.

On re-entering the room from the other side of the mural the floor in the center of the room has collapsed leading down to the basement. Going down to the basement via the hole leads to a generator room with a Novice locked door and connected terminal. Behind this door is a fusion core. Turning right then following the left-hand wall of the generator room one will find a toolbox and a cabinet. On the right is a stairwell leading back up to the first floor. From here take the stairs opposite the locked gate up to the second floor.

The following quotes are heard while navigating through four exhibit rooms on the first floor.

The stairwell splits against the back wall to the southwest and the northeast. If one takes the southeast stairwell there is a barricade partially blocking the top, behind the barricade is a crate with a bag of cement resting on top. If one turns to the northwest from here they can walk along the balcony to the front of the building. There are two rooms on this side of the floor and a foyer between them.

If one takes the northeast stairwell instead and turns left at the top they will be on the balcony on the opposite side of the floor. There are two doors on the northeast wall, one leads into the American Freedom Fighters exhibit. Two raiders can be eavesdropped upon, one of which expressing their wish to leave before being shot, and the other threatening them should they try to do so. In the room are two exploding tanks, another ammunition box and a duffle bag. The mural is ahead on the curved wall, with a placard on the podium at the center.[5] The mural itself lacks labels or descriptions of any kind.

The northeast wall has collapsed, allowing passage to the corridor beyond. If one turns left at the end of the passage they will see a door directly in front, leading out to the main room. The floor below has collapsed, hugging the wall to the east of the door will allow one to return to the balcony or one can drop down to return to the entrance; alternatively, there is a stairwell on the right, leading up to the third floor.

On reaching the third floor there is a Nuka-Cola machine and a standard refrigerator directly in front of the Sole Survivor. To the left there is a table and two chairs in the corner, but nothing of note. To the right of the stairwell, however, leads to a corridor with two doors on either side. The southwest doors lead out onto the second-floor balcony, the northeast doors lead into the offices. The wall between these two rooms has collapsed, essentially making them into a large single room. Both rooms contain desks and filing cabinets, however, the southeastern room also contains two caps stashes; one is next to the desk by the fallen diving wall and the other between the filing cabinets by the southeastern door.

If one takes either of the doors out onto the second-floor balcony there is a door to the northwest which Preston Garvey and the Quincy refugees have locked shut. When entering the museum for the first time, two raiders can be found kicking on the door and threatening the room's occupants. After a brief conversation, the raiders will give up on the door and head towards the stairwell. As with the first-floor balcony, there was originally a path across the center of the room to the other side, but this has collapsed, leaving access to the far side accessible through the locked office.

Upon entering the office, one is confronted by a desk and Novice locked terminal, which Sturges is using. The Atomic Command issue of RobCo Fun magazine is also on the desk, next to the terminal. If one turns to the southwest there is a couch which Mama Murphy is sat on. Marcy Long can be seen pacing the breadth of the room and by the desk in the western corner Jun Long is sat on the floor; on the desk, itself is the Perception bobblehead. the door on the northwest wall leads out to the external balcony, where Preston was first seen firing at the raiders in Concord below, the southwest door leads out onto the balcony.

Upon exiting the museum onto the rooftop there is a desk with SSG Michael Daly's log and a toolbox sat on top. There is also a caps stash on the floor next to it. To the right of the desk is the crashed Vertibird and a complete suit of T-45 power armor, less the fusion core to operate it. Inside the Vertibird is the minigun and if one passes through the Vertibird a stool and toolbox can be found along with several junk items. At the far end of the roof, the wall has collapsed, allowing one to drop back to the ground.

The Museum of Freedom appears in Fallout 4.

Vertibird propeller as seen from the first floor

Caps stash in the second floor office by the desk

Caps stash between the filing cabinets

Raiders outside the office 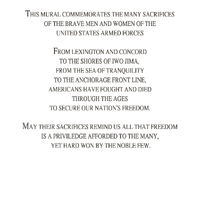 Concept art of the museum and Concord Church