Fallout 3
“Oh, yes. Everything here is from Dave's adventures in the Wasteland, before he founded the Republic. I give a tour every day starting around 2pm. You should stop by then!”— Shawna

The Museum of Dave is a small building in the Republic of Dave. It consists of a single interior section. The museum is also a trading location. Shawna is a merchant and is usually found here teaching children of Dave's past.

The museum hosts a collection of Dave's "artifacts" and is used by Shawna as an impromptu schoolhouse for the children of the republic. At certain times of the day, Shawna gives a "tour" of the museum, explaining the history behind the various Dave memorabilia stored in the building.

The following is a transcript of the tour of the Museum of Dave:

To my far right is the baby carriage that our great leader slept in as a newborn baby. Unlike most babies, he never cried, and his poop didn't stink.

Dave had 8 siblings, and made his own baseball team. The team was so good, in fact, the wasteland team was so scared, it never showed up to compete.

The briefcase is the very one Dave took with him when he became fed up with the poor ways that his father ran the nation.

Dave brought back many items from the wasteland. It was artifacts like these that amassed the Republic's great wealth.

Dave collects many war collectibles, including holotapes and war weaponry.

This globe represents the whole planet that Dave traversed. Don't let its size fool you, the world is at least fifty times bigger than this.

I don't know who put that tire there.

These weapons were used against the USA before the bombs fell. Dave probably acquired these when he walked to China.

Dave is a world-renowned marksman, known for shooting a fresh apple out of the hand of a raider from across the Potomac.

Mounted to my left is the very head of the slain deathclaw that Dave encountered during his quest through the wastes. I know what you're thinking and no, that's not a brahmin skull. Brahmin have two heads, so there'd have to be two skulls for it to be brahmin. Please, no touching.

And, that's the tour! I hope you enjoyed it!

The museum consists of a single room with a blackboard on the wall opposite the door. From the door, a number of school desks are lined up on the left and the Dave artifacts are found along the right wall, partially on shelves and partially fixed to the wall.

The Museum of Dave appears only in Fallout 3. 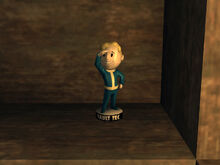 The Perception bobblehead on a bookshelf
Deutsch Русский Українська 中文
Community content is available under CC-BY-SA unless otherwise noted.
Advertisement