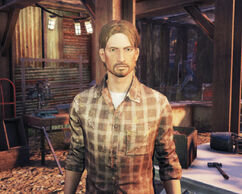 Murray, referred to as a settler in-game, is a farmhand living at Anchor farm in 2103.

Murray hails from the Capital Wasteland,[1] and travelled to Appalachia with Daniel's group in 2103 hoping for a better life. He is slightly friendlier towards outsiders than his fellow settlers, but still wishes to be left alone. He can be found in the workshop area behind the farmhouse.

Murray will voice some of his thoughts and concerns, such as how Anchor farm's eponymous statue came to the farm.

Murray appears only in Fallout 76, introduced in the Wastelanders update.

Retrieved from "https://fallout.fandom.com/wiki/Murray_(Wastelanders)?oldid=3465391"
Community content is available under CC-BY-SA unless otherwise noted.