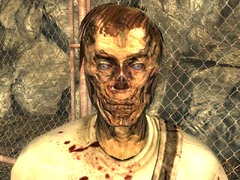 Murphy without his glasses

“You got the stuff, I got the caps. A match made in heaven.”

Murphy is a ghoul scientist living inside Northwest Seneca Station in 2277.

Murphy was an amateur scientist even back in his pre-ghoul days, and his tenacity has allowed him to deal with his "affliction." He is close to making some real caps with his invention - an enhanced dose of Jet that can keep a ghoul up, as Jet "doesn't affect ghouls much."[1]

He has an assistant named Barrett, who acts primarily as a bodyguard, but can also be seen assisting Murphy with other tasks.

Murphy appears only in Fallout 3.