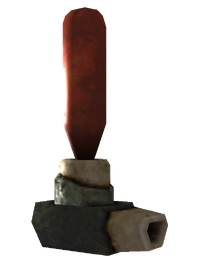 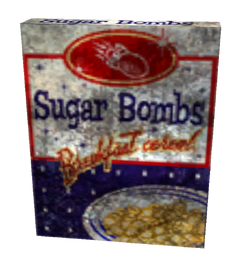 “You got the stuff, I got the caps. A match made in heaven.”— Murphy

Murphy's Bombing Run is an unmarked and repeatable quest in Fallout 3.

Murphy is a ghoul scientist, stationed just inside Northwest Seneca Station, who is working on an improved version of the drug Jet, known as Ultrajet. However, he wants the Lone Wanderer's help with finding one of the ingredients: Sugar Bombs.

The name of this quest appears to be a play on words from the term of the same name. A bombing run is the part of a flight of a bomber aircraft that brings it to the point over a target at which its bombs are released.

After speaking to Murphy for the first time, giving him any boxes of Sugar Bombs will result in one not getting paid. Leaving the area and then returning will fix this problem. [verified]

Retrieved from "https://fallout.fandom.com/wiki/Murphy%27s_Bombing_Run?oldid=3452198"
Community content is available under CC-BY-SA unless otherwise noted.