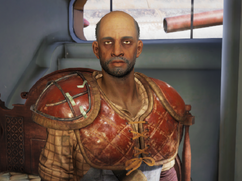 Munch lives in a tent in the northern part of the Crater. He describes himself as the resident historian,[1] though he freely admits he bends the truth about history.[2] Some of his writings on topics such as the Great War, whales, and the space station he resides in can be found in his tent.

Munch appears only in Fallout 76, introduced in the Wastelanders update.

Retrieved from "https://fallout.fandom.com/wiki/Munch?oldid=3243852"
Community content is available under CC-BY-SA unless otherwise noted.