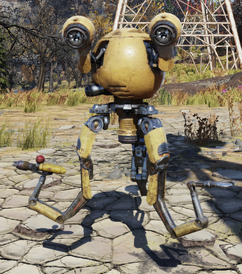 “Get your lemonade here! Cold, refreshing, and completely organic!”

Mr. Squeeze is a friendly Mister Handy merchant in the Lemonade Stand random encounter in 2102.

Mr. Squeeze sets up his lemonade stand in random locations across Appalachia. He sells a small collection of items, including recipes for lemonade and hard lemonade.

Mr. Squeeze is found in a random encounter with his lemonade stand. He is the only source of acquiring the recipes for lemonade and hard lemonade.

Mr. Squeeze makes mention of a person named "Jimmy," who appears to be his employer. Whether this is a current situation or simply old programming is unknown.

Mr. Squeeze appears only in the Fallout 76 add-on Wild Appalachia.

Mr. Squeeze's lemonade stand
Add an image to this gallery
Retrieved from "https://fallout.fandom.com/wiki/Mr._Squeeze?oldid=3218061"
Community content is available under CC-BY-SA unless otherwise noted.