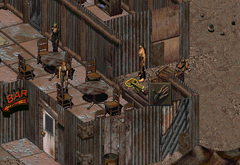 You can find the doll here
“You see a small doll with a big red nose. For some reason, you don't trust this seemingly-innocent child's toy.”— Item description

Mr. Nixon is a quest item in Fallout 2.

Mr. Nixon is a doll modeled after the (very) late President Richard Nixon.

Hidden outside Cassidy's bar in Vault City, Mr. Nixon is the property of one child called Curtis who is found nearby. After finding it, it can either be given back it to Curtis, or its limbs ritually torn off in front of him.

The Chosen One will not be able to search the rock-pile until the doll is returned and they learn how it coerced Curtis into hiding the wrench. If the Chosen One tries to search it anyway before completing these steps, they will shrug off the rock-pile as being "just a pile of rocks".