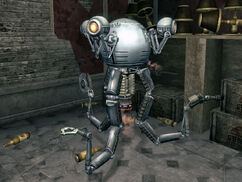 “Ah, a job well done is its own reward. Good riddance to this rubbish.”

Mr. Janitor is a Mister Handy model janitorial robot found in the Sunset Sarsaparilla headquarters in 2281.

A new fully-automated janitorial system was installed at the Sunset Sarsaparilla bottling plant, located on the west side of Las Vegas. Consisting of three maintenance-model Mister Handy robots (MHDY133, MHDY134, and MHDY135), the system was designed to replace several custodial positions in the plant, which would have been very tedious to perform by hand.

The robot with the identification number "MHDY135," nicknamed "Mr. Janitor," was a big favorite of the staff at the Sunset Sarsaparilla plant. He was especially recognized for doing a better job at cleaning up stray bottle caps than the earlier models of his type. Without the beloved robot on the job, stray bottle caps on the factory floor would have caused serious damage to the machinery.[1]

When activated by the terminal in the janitor's closet (50 Science required), he will roam around the bottom floor commenting on how dirty everything has gotten over "the past few days," and that "this room is even dirtier than the last one!" Mr. Janitor also comments on the Courier if approached or if they kill another of the robots in Mr. Janitor's presence, asking "what are you savages doing here?" Eventually, Mr. Janitor will end his cleaning patrol, dump a random amount of bottle caps into the garbage, and shut down again back in his janitor's closet.

Retrieved from "https://fallout.fandom.com/wiki/Mr._Janitor?oldid=3259640"
Community content is available under CC-BY-SA unless otherwise noted.