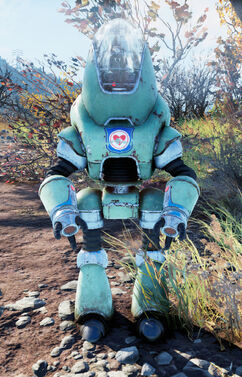 “It's not enough that I am tethered to an invisible point forever, but the nickname? So uncouth. None of the other Volunteer Bots had idiotic names.”— Mr. Fluffy, on his situation and nickname

Mr. Fluffy is a Responder Protectron in Appalachia in 2103.

Mr. Fluffy is a Responder Protectron that was hacked by Miguel Caldera to act as a personal bodyguard.[1][2] He was named Mr. Fluffy after a dog which was killed while Caldera was testing a bug with the Veterinary Bots,[3] a nickname which the Protectron eternally resented.[4] His curmudgeonly personality may be a result of an unsolved bug that turned him into "a jerk." Miguel believed he had a fix for the bug but didn't get a chance to implement it before his death.[5]

Mr. Fluffy was with Miguel when he died and his Protectron programming prevented him from deviating from Miguel's final orders for him to guard the campsite and his body, even long after the latter's death,[6][7] expressing anger at how he had died in such a fashion, ignoring his own advice and instructions to others.[8] However, in his years of isolation, he had come to miss the act of watching volunteers set up their C.A.M.P.s, expressing excitement when he sees a volunteer doing so.[9]

Mr. Fluffy appears only in Fallout 76.

Retrieved from "https://fallout.fandom.com/wiki/Mr._Fluffy?oldid=3405628"
Community content is available under CC-BY-SA unless otherwise noted.