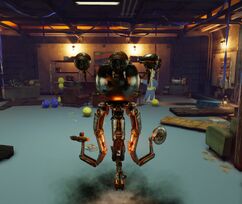 Mr. Clark is a Mister Handy attendant at the Shelters Claim Center in Appalachia in 2103.

Along with two engineers, Mr. Clark was a sales bot stationed at the Shelters Claim Center when the Great War occurred. The engineers used the bot to monitor the communication network, hoping to contact other survivors, but after radio silence and no signs of life in Appalachia, they departed the region, begrudgingly leaving Mr. Clark, who refused to abandon his post. [1][2]

Mr. Clark was found by Reuben Gill, who was attempting to re-enter Vault 51 to destroy the ZAX 1.3c housed within the facility. Reuben attempted to force entry by using the unit's internal network to contact Vault 51, despite protest from Mr. Clark.[3][4] After receiving a message from within Vault 51, Reuben noted memory losses and changes in Mr. Clark's speech patters, which reminded him of ZAX.[5]

When met by the Vault Dwellers, Mr. Clark fulfills his original function by providing access to the Shelters system for use with the Construction and Assembly Mobile Platform.

Mr. Clark appears only in Fallout 76, introduced in the Steel Dawn update.

Retrieved from "https://fallout.fandom.com/wiki/Mr._Clark?oldid=3381182"
Community content is available under CC-BY-SA unless otherwise noted.