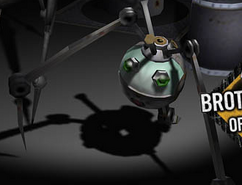 "Mr. Buddy" is a special beta program implemented in Tesla robots. Once the console used, three special models of Tesla robot are offered, the more powerful the robot, the more it costs. Like all consoles in the Secret Vault, it was adapted to accept caps as currency.

This one looks and acts exactly like a normal Tesla robot but a little more powerful.

This one is a bit larger than normal Tesla robot, and also stronger and more resistant.

This one is a prototype, improved model of Tesla robot. Surprisingly, it's very small than normal Tesla Robot, only a bit bigger than service robot. But the MK-X is the strongest and it can obliterate any super mutant in a few seconds.

Unfortunately, although the robot can be bought one room before the final confrontation with Attis in the lab's core, it only helps with the four mini-boss battles in Lab Three. It will be left behind there when entering the core.

The Mr. Buddy console is found only in Fallout: Brotherhood of Steel.

Retrieved from "https://fallout.fandom.com/wiki/Mr._Buddy_console?oldid=3189746"
Community content is available under CC-BY-SA unless otherwise noted.