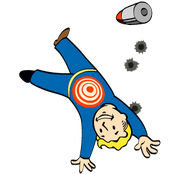 Moving Target is a perk in Fallout 4, Fallout 76, and the Fallout: The Board Game expansion Fallout: New California.

Moving target is an Agility-based perk.

Moving Target is a perk in the Nuclear Winter battle royale mode. It requires 3 SPECIAL points to equip.

Moving Target is not the only Damage and Energy Resistance perk in Fallout 76, and similar perks may be used instead of or in addition to it, including:

Moving Target is added to the base game with the Fallout: New California expansion. By discarding the perk card during their turn, the player character can immediately gain 6 movement points.

Retrieved from "https://fallout.fandom.com/wiki/Moving_Target?oldid=3428755"
Community content is available under CC-BY-SA unless otherwise noted.