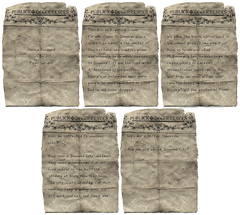 Moving Forward is a paper note in Fallout 4. It is one of several articles published by Publick Occurrences.

It becomes available once the Sole Survivor, after the destruction of the Institute and the events of In Sheep's Clothing, finds out that Mayor McDonough was a synth. As with other issues of the paper, it can be found in multiple spots around Diamond City.

There is no disputing it now. Former Mayor McDonough was a Synth; an agent in the pocket of the Institute, who used his power and influence to untold damage to Diamond City and the lives within it. Abandoned by his masters, there's no telling how many more people he would have hurt or killed had he not been stopped.

We have the truth, bitter as it is. We cannot predict how long it will take us to unravel all of McDonough's lies, to even begin to repair years of carefully orchestrated sabotage. Is the Wall truly secure? Will we ever know the fates of Diamond City's missing? Will the position of Mayor ever be entrusted to someone else?

Everyone in Diamond City, whether they would acknowledge it or not, lived in fear of the Institute striking at them. Now they have. The city is still standing. Our daily routines keep grinding away. We still work, and eat, and sleep, and hope for a better tomorrow.

Are you still afraid, Diamond City?