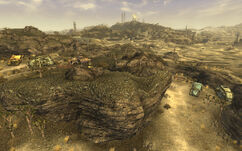 The Mountain Shadows campground is a location in the Mojave Wasteland in 2281. It is located southeast of Lake Las Vegas and northwest of Ranger Station Alpha.

This is a small campsite with a campfire on the eastern side with various minor loot scattered around. The vehicles here will explode if damaged. A copy of Today's Physician is on one of the tables at the upper campsite.

A script which manages the cazador presence at Bonnie Springs (VERShadows01QuestScript) reveals that the encounter was originally supposed to take place at Mountain Shadows campground, but was moved and reduced in scope due to performance issues encountered on the Xbox 360 and PS3. The script comments say in part:

“It's responsible for some encounters in the Mountain Shadows Campground - including a Cazador take-over.
Moved this encounter to Bonnie Springs, and reduced the number of spawns, so that we can run shenanigans on adorable consoles.”

The script also includes commented-out references to greater numbers of both cazadores and Vipers gang members.

The campground
Add a photo to this gallery
Retrieved from "https://fallout.fandom.com/wiki/Mountain_Shadows_campground?oldid=3497271"
Community content is available under CC-BY-SA unless otherwise noted.