Mount Charleston is an unmarked location in the northwestern Mojave Wasteland.

Mount Charleston is a large, snow-peaked mountain that covers a relatively wide area. Many factions have properties located on or in the vicinity of it, and the location is known for an abundance of cazadores.

The "interior" part is one of the very few locations in the Fallout series where snow can be found, and one of the few parts of the Mojave that is not desert, with a green forest of pine trees instead of desert plants. Jacobstown is located in a valley between Mount Charleston and Griffith Peak. As previously mentioned, many structures of several factions can be found on the "exterior" parts of the mountain, such as:

Mount Charleston is located in the same geographical area as the real world Mount Charleston, the highest mountain in both the Spring Mountains and the entirety of Clark County, Nevada. 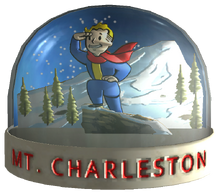