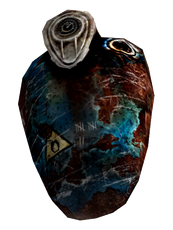 A motorcycle gas tank is a miscellaneous item in Fallout 3 and Fallout: New Vegas.

A blue motorcycle tank that has rusted over the years. A yellow hazard decal indicates that it is highly flammable. The motorcycle tank is often found near motorcycles, especially in raider camps. It is also often accompanied by a motorcycle handbrake; Incidentally, whenever one finds the two together, one should always pick up the handbrake first - picking up the gas tank will often cause the handbrake to clip through the floor.

In Fallout 3, it is one of the four components needed to make a flaming melee weapon known as a Shishkebab. The tank can also be used as Rock-It Launcher ammunition. It has no known uses in Fallout: New Vegas.

Motorcycle gas tanks can occasionally be bought from vendors, but there are 93 guaranteed locations, including:

Retrieved from "https://fallout.fandom.com/wiki/Motorcycle_gas_tank?oldid=3253936"
Community content is available under CC-BY-SA unless otherwise noted.