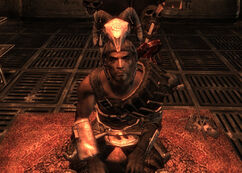 “You? Take care of me? Ha! You don't look half-tough enough.”

He is described as being the sanest of the Fiends, being mentally stable enough to control the band of drugged psychotics and organize them into a credible fighting force, and even establishing a base of operations out of Vault 3. Ranger Bryce Anders remarks that Motor-Runner has survived several previous NCR assassination attempts, which prompted Colonel Hsu to give Anders the mission of killing the Fiend leader personally. According to Hsu, Motor-Runner has a habit of decapitating dead NCR troopers. Motor-Runner regularly purchases slaves, and did business with Dermot and Saint James on at least two occasions. The first time he purchased a teen girl for 500 caps, but gave nothing for the girl's father since the man attacked him. At another point he purchased a woman from the pair for 250 caps, but gave only 25 caps each for her elderly parents, and nothing for the woman's infant son.

He is found in his throne room in the Vault 3 maintenance wing flanked by his two guard dogs, BoneGnash and GnashBone.

The Courier can sell him various drugs (Jet, Psycho, Buffout) for 20 caps (or 22 caps, if the player passes the Barter check) if you pass a Speech check at the entrance of Vault 3 when speaking to the Fiend at the door. 22 caps is more than the player will ever be able to receive from selling drugs valued at 20, with the exception of one instance involving Ricky.

If you have completed Still in the Dark, Motor-Runner will talk in normal fiend dialogue after the initial forced talk, including, "House is dead, wonder if Motor-Runner will let us hit the Strip now."[verified] 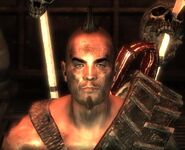 Motor-Runner on the Collector's Edition playing card
Add an image to this gallery
Retrieved from "https://fallout.fandom.com/wiki/Motor-Runner?oldid=3058421"
Community content is available under CC-BY-SA unless otherwise noted.