The Mothman Museum is an unmarked location in the Appalachian town of Point Pleasant.

The museum was dedicated to the Mothman, one of Appalachia's most well known cryptids.[1][2]

The entrance is via two locked doors (Picklock 1) at the front or a locked door (Picklock 0) at the rear. A large statue of the Mothman is next to the building. The first floor consists of the main museum area with Mothman posters on the walls, display cabinets with various junk items, and a serving desk. There is also a miniature statue of the Mothman in one of the front window display cabinets.

At the back of the room is a locked (Picklock 2) restroom door. This can be unlocked with the bathroom key located in the house up the hill from Wilson Brother's Auto Repair (it is on a desk to the right when entering). A set of keys is located on a washbasin to the right of the door after it is opened. This allows access to some candlelit stairs which lead down to the basement behind a wooden screen on the left.

The basement used to be a storeroom but a hole has been knocked through a partition wall leading to a hidden shrine to the Mothman. Cult statues are dotted around the drape-covered walls and church pews line a carpeted central aisle. There are candlelit altars at either end of the room and a wooden lectern with two readable sermons on it at the main end. Another hole in the wall leads to a small room with an armchair, I.V. drip, wheelchair, and a locked safe (Picklock 3) next to which some ritual bindings can be found.

The upper floor can be accessed from the ground level via a set of stairs. The upper floor is comprised of a small partitioned office, store cupboard, a tinker's workbench, general storage space, and the back door at the rear which leads outside.

Mothman Museum appears only in Fallout 76.

This museum is inspired by the real life Mothman Museum in Point Pleasant, West Virginia, and has a statue depicting the local mythical creature. An annual festival takes place to honor the legend of the Mothman. 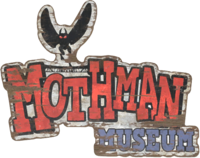