“Defy hostile alien abductors and fight your way off of the massive Mothership Zeta, orbiting Earth miles above the Capital Wasteland. Mothership Zeta takes Fallout 3 in an entirely new direction – outer space. Meet new characters and join with them in a desperate bid to escape the aliens’ clutches. To do so, you’ll wield powerful new weapons, like the alien atomizer, alien disintegrator, and drone cannon, and deck yourself out in brand new outfits, like the Gemini-Era spacesuit and even samurai armor.”— Official description

Mothership Zeta is the fifth and final add-on for Fallout 3, developed and published by Bethesda Softworks.

Mothership Zeta was initially released exclusively as downloadable content on Xbox Live and Games for Windows Live on August 3, 2009. It was made available for the PlayStation Store on October 8, 2009. For Xbox 360, download codes for Xbox Live are also available in retail.

Like all add-ons, it is included in the Fallout 3: Game of the Year Edition, released on October 13, 2009 for all platforms. For Steam users, Mothership Zeta, along with all the other Fallout 3 add-ons, is available, released on July 16, 2010.

In Mothership Zeta, an alien mothership abducts the Lone Wanderer, making the whole add-on take place onboard the alien ship in orbit around Earth.

Aboard the Mothership, the questline is not completely linear and features some exploration. The Lone Wanderer will walk outside the ship into space and meet other abductees whom the aliens have captured over time. The player character is able to return to the ship and use it as a "home-base" of sorts once the main quest is completed, although most of the ship will become inaccessible.

Mothership Zeta was designed with the intent of creating a unique environment that was very different from the Capital Wasteland to explore. Emil Pagliarulo and Jeff Gardiner, both enthusiasts of alien conspiracy theories, researched information on the Internet to bring up in discussions. The quest line of Mothership Zeta was written by Brian Chapin, who also wrote the base game's main quest line.[1]

The Lone Wanderer receives an unintelligible radio transmission which leads to a crashed alien recon craft. On approaching the wreckage, the player character is beamed into the alien mothership known as Zeta, where they will meet other prisoners who have also been abducted over the centuries. In order to escape, working together will be essential.

After being beamed aboard, the Lone Wanderer is subjected to an alien medical experiment. In the cutscene, the player character passes out during the procedure and awakes in a cell with another abductee named Somah. She explains that all of their equipment has been taken. She comes up with a plan of escape: Staging a fistfight so that the alien guards will intervene, then overpowering them. They soon come across Sally, a little girl who was abducted soon after the Great War, who asks them to help her escape by destroying the reactor in the room. After freeing her, she says that she knows a lot about the ship and will provide aid in turn.

Sally leads the Lone Wanderer to a room with several cryo-tubes, to acquire a spacesuit from one of the frozen abductees, an astronaut (who, unfortunately, does not survive the "thawing" procedure). The suit is needed for a spacewalk outside the ship to access a teleporter; first, however, the generators in three other areas of the ship must be destroyed in order to provide a distraction. Three of the abductees will offer to assist in each of the generator areas: Elliott Tercorien will help with the Cryo Labs, Somah will aid traversing the Robotics Factory, and Paulson will aid with the Hangar.

After enabling the teleporter, the survivors are beamed to the upper section of the Mothership, where they witness a demonstration of the ship's Death Ray as a threat to scare them into surrendering. The player character must then fight through several portions of the second section which consists of a weapons laboratory, biological experimentation lab, and Biological Research. At the conclusion of this journey, all surviving companions can again join the Lone Wanderer by means of the transporter from the Observation Deck. After fighting through to the Death Ray control center, then the living quarters, the bridge is finally accessible. There, all of the abductees must defend the bridge from aliens attempting to re-take it, while at the same time using the ship's weapons to defeat an attacking alien vessel similar to their own.

Upon defeating the ship, the abductees celebrate and Sally or Elliott (whichever gets to the player first) reports that in the midst of all of the chaos on the bridge, Elliott and/or Sally pushed a button which dropped a beacon on the surface near the Recon Craft Theta crash site. This beacon allows the Lone Wanderer to return to the Capital Wasteland or teleport from there to the Mothership (though most of the ship is now inaccessible).

The world map location appears to be either the Ranger Compound or the player character's last known fast-travel location while on Mothership Zeta.

Lone Wanderer with the alien disintegrator

Exterior view of the ship

Combat aboard the Mothership

The Disintegrator in use 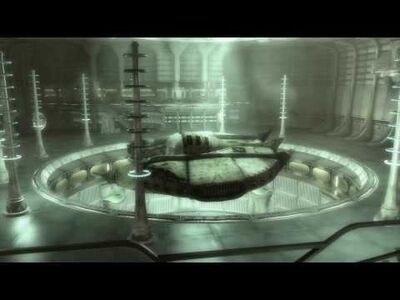