Mother of the Fog

Mother of the Fog 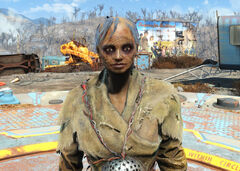 Mother of the Fog (or Fog Mother, in-game name ghostly figure) is a Child of Atom who lives on the Island. She, thanks to her actions, became a mythical deity incorporated into the faith of the Children of Atom.

A reclusive hermit, the Child of Atom who became known as the "Mother of the Fog" has been on the Island since at least before the Children of Atom were exiled from Far Harbor. She may have been one of the original Children to have set foot on the island or one who contributed to set up several shrines throughout the island.[1][2][3][4][clarification needed][5][6] To travel about the Island undetected, she began to use Stealth Boys[clarification needed] and was able to scavenge from across the Island.[7] After she became a recluse, and long enough for most of the Children to no longer believe that she was a fellow child of Atom, she led the pilgrimage of exiles from Far Harbor to the Nucleus.[8][9][10][11]

By this time, she became a mythical figure and incorporated into their faith as some sort of spirit, a creature of the wilds, a divine messenger and one of the holiest visions of the cult.[12] She became described as a faceless figure, dressed in tatters and glowing, or rather, oozing fog.[13] However, a few members still believe that she is just a hermit.[11] She continues to watch over her fellow cultists from behind the veil of anonymity. She has observed High Confessor Martin come to question his purpose and leave the cult,[14] the Sole Survivor or Kasumi Nakano arrive on the Island,[15] and a group of Children being cornered in a ruin close to her camp at Haddock Cove.[16]

The Mother of the Fog appears only in the Fallout 4 add-on Far Harbor.