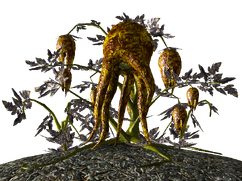 Mother Punga in the Sacred Bog

“You may not be so brave when you face the Ritual of the Mother Seed. Stronger souls than you have attempted it and lost their minds. Venture west to the great bog, and within you shall find the mother of all Punga Fruit. She stands taller than a man, and her vines guide our future. Collect her seeds, and kneel before her wisdom. Only then will you be ready to enter these sacred halls.”— Jimson

The Mother Punga (also called the Mother Seed by Point Lookout tribals) is a gigantic punga fruit growing in the Sacred Bog of Point Lookout in 2277.

The Mother Punga is an enormous "seed," which is part of a huge wild bloom of the punga fruit. The seeds nestle on a pod in the recessed part of the fruit. The plant shudders and releases a puff of pollen, said to cause vivid hallucinations.[1]

It gives the Punga Power! perk after taking part in the Ritual of the Mother Seed of the Point Lookout tribals. The person is rendered unconscious and loaded with punga-infused imaginations.

It is revealed that Tobar the Ferryman follows the victim into the Sacred Bog. He then takes the person while unconscious and removes a piece of their brain. After undergoing the procedure administered by Tobar, the Point Lookout Tribe accepts the person as one of them.

Mother Punga only appears in the Fallout 3 add-on Point Lookout.

Retrieved from "https://fallout.fandom.com/wiki/Mother_Punga?oldid=3190094"
Community content is available under CC-BY-SA unless otherwise noted.