Mother or Matriarch is the oldest, wisest, and strongest of all the hairy deathclaws found in and around Chicago.

She is the leader of her kind, referring to them as her brood. However, she was captured by the Beastlords of Mardin, and was used by them to gain control over the deathclaws. She was liberated by the Warrior of the Brotherhood of Steel. Thankful, she permitted some of her kind to join the Brotherhood, and even joined it herself.

Mother becomes available after the Warrior reaches the rank of Junior knight, and after he/she helps her in Mardin.

Mother appears only in Fallout Tactics. Her appearance is different in the various settings where she is encountered:

When the elders accept her children as recruits for the Brotherhood, Mother will warn the Warrior not to feed them flesh after midnight.[1] This is a reference to the 1984 movie Gremlins, in which giving the mogwai food after midnight will turn them into the murderous, reptilian gremlins. This is also a comment on the mammalian appearance of the deathclaws in Fallout Tactics, as opposed to their reptilian counterparts in the other games.

If you recruit the Mother, then choose the perk Mutate! to replace one of her traits, she will actually lose it but the replaced trait won't appear. 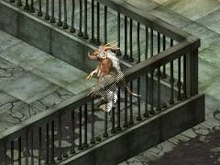 Matriarch as she appears in Mardin 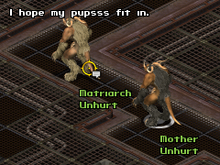 Matriarch as she appears in Bunker Gamma, accompanied by the recruit "Mother"