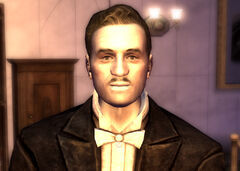 Mortimer is a high-ranking cannibalistic member of the White Glove Society who works as the maître d' and Marjorie's assistant and right-hand man at the Ultra-Luxe Casino in 2281.

Unlike the other reformed members of the group, Mortimer considers the present direction of the White Glove Society as misled. He views the Society as an elitist institution; denying themselves access to such exotic meat has taken away the only reason for the group to exist. He does not openly share this view, however, and Mortimer keeps his secret plans to return the society to cannibalism intact by any means necessary, whether it be hiring an assassin to silence anyone who gets in his way, or having his White Glove supporters kidnap patrons in the hotel that fit the bill for his motives. Behind closed doors, the society essentially has split into two camps that disagree over the issue.

Once Mortimer obtains a suitable individual for his head chef Philippe to cook and prepare, he plans to hold a special banquet for the members of the society in their private dining hall within The Gourmand to bring them back to their roots. Before this, he will deliver a speech, in which he reveals his true nature to the dinner guests.

To achieve this, Mortimer and his men had intended to capture Carlyle St. Clair III to butcher and dine on. St. Clair was an ideal candidate because, being from a wealthy family, was healthy and well-fed. However, Mortimer mistakenly kidnapped a different boy, Ted Gunderson, who is problematic for him because his father, a rancher named Heck Gunderson who had came to conduct a business deal with the White Glove Society, is willing to do anything to ensure the safety of his son.

Beyond the Beef - Mortimer wishes to revert the White Glove Society to its former cannibalistic ways and hopes to convince them by feeding them human flesh during an upcoming banquet. If a Speech check (62) is passed, the front desk manager will try to recruit the player character to help achieve his goals, which involves Ted Gunderson. If one's Speech is too low, it is possible to try to pass a check for evil Karma and non-neutral Strip reputation.

"I guess that's the hazard of a cannibal becoming a gourmet - it's hard to please a refined palate." – Chauncey