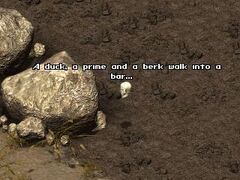 Morte, born Mortimer Rictusgrin, is a floating skull, and actually not a Mimir. He can be met in the special encounter Morte.

Morte is floating around the wasteland, having landed in New California after accidentally going through a portal in a brothel window in Sigil, the City of Doors.

Morte appears only in Fallout Tactics.

Morte is an important character and a potential companion in the game Planescape Torment made by Black Isle Studios. The lead designer was Chris Avellone, a major developer of the Fallout universe.

Retrieved from "https://fallout.fandom.com/wiki/Morte?oldid=3298207"
Community content is available under CC-BY-SA unless otherwise noted.