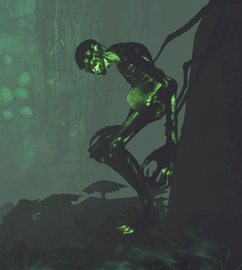 Morris Stevens (named Progenitor Wendigo in-game) was the former leader of the Gourmands, one of the five raider groups of Appalachia.

Morris was exiled from the Gourmands after a dispute involving him cannibalizing fellow members.[1][2] After Morris was relieved of his leadership position, he and his wife, Edie Stevens, moved away to live inside the wendigo cave, where he subsequently ate her before later devolving into a wendigo.[3][4] After this he continued to prey on his former gang and other raiders to the point where a considerable bounty was placed on his head.[5]

Key to the Past: The player character is tasked by Rose with retrieving the Gourmands' piece of the Raider stash code, carried by Stevens.

Morris Stevens appears only in Fallout 76.

Morris on alert
Add a photo to this gallery

Retrieved from "https://fallout.fandom.com/wiki/Morris_Stevens?oldid=3371723"
Community content is available under CC-BY-SA unless otherwise noted.