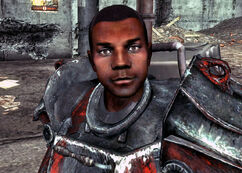 “Are you some kind of idiot? Listen, little girl... hey, wait a second. What's that on your wrist there? Some kind of computer?”

Defender Morrill is a member of the Brotherhood Outcasts located at Bailey's Crossroads in the year 2277.

An accomplished fighter who's seen more action in more conflicts than he can comfortably remember, Morrill is a loyal Defender in Protector McGraw's service. He is in charge of patrolling the D.C. Metro Ruins and clearing the almost constant stream of super mutants that seek to overrun the Outcasts' small base of operations. Recently, super mutant activity has increased to such an extent that he has transmitted an emergency radio broadcast seeking assistance.[1]

He then stays outside the facility with the remaining Outcasts to defend against (periodic) attacks from the super mutants.

Defender Morrill appears only in the Fallout 3 add-on Operation: Anchorage.

Retrieved from "https://fallout.fandom.com/wiki/Morrill?oldid=3450230"
Community content is available under CC-BY-SA unless otherwise noted.