“My heart bleeds for them. Led down a false path. They don't know their efforts will bring only pain and suffering to their fellow beings.”

Outwardly, Morpheus is the supreme leader of the Children of the Cathedral. Though he adopts a pious demeanor and can sound a bit like an old-time country preacher, he does not believe that the Holy Flame, the Dark Lord, the Master is, in fact, God. Morpheus is intelligent, crafty, sly, greasy, and thoroughly evil. Ensnared by the promise of power rather than by belief, he has a short fuse and a terrible anger, which makes him an extremely dangerous individual.[1]

Morpheus lives in the Cathedral, on the tower's highest floor. It is here that he oversees the immediate goals of the Children and holds their Communion by means of large, propaganda-esque monitors located on the main floor. He dies in 2162 by the Vault Dweller's hand, either in person, or as the Cathedral is destroyed.

Morpheus appears only in Fallout as a talking head. He is voiced by David Warner. He also is mentioned in the Fallout Bible. 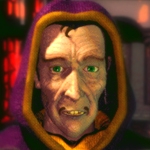 Slide with Morpheus
Add an image to this gallery

Retrieved from "https://fallout.fandom.com/wiki/Morpheus?oldid=3071859"
Community content is available under CC-BY-SA unless otherwise noted.