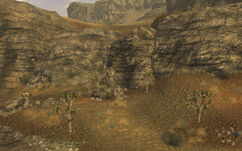 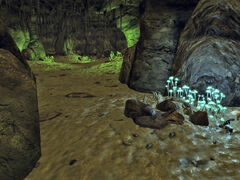 The Morning Star Cavern is a location in the Mojave Wasteland, situated east of the Mojave Outpost and southwest of the Nipton Road pit stop.

The entrance to the cave is surrounded by rocks and skeletons. Next to the hollowed-out rock, the Courier can find an explosives crate filled with various explosives guarded by six night stalkers.

The cave is inhabited by the den mother, which is a special, stronger and rarer version of a night stalker. There are also many young night stalkers in this cavern. The cavern is a small, single crescent-shaped room. To the right is a dead end, and to the left is a large arc that will lead to a dead mercenary and a duffle bag.

The Morning Star Cavern appears only in Fallout: New Vegas.

The Morning Star Cavern is located in the same geographical area as the real world Morning Star Mine in the Mojave National Preserve.

Mole rat pup being devoured by a young night stalker

The dead mercenary and duffle bag in the last cavern room
Add an image to this gallery
Retrieved from "https://fallout.fandom.com/wiki/Morning_Star_Cavern?oldid=3179438"
Community content is available under CC-BY-SA unless otherwise noted.