The Morning Glory cave is a location in Zion Canyon in 2281. It is located directly west of the North Fork Bridge, and north of Patriarchs' Campground.

There are three spore plants inside the cave. The cave also contains several traps (bear traps, which lie mostly under branches, and two rigged shotguns). At the center of the cave atop a rock spire is a duffle bag, a crate and ammunition box with random loot, and junk items strewn about. The duffle bag contains the key for a locked gate on the wall opposite the entrance (or it can be picked with an average Lockpick skill). Behind the gate there is a terminal that tells part of the story of the Survivalist, who speaks of seeing corpses (ghouls) and ten sets of tracks 1/2 mile northeast of the canyon entrance, referring to Cueva Guarache. 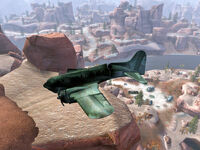