The Mormon Church or Mormonism is a religion practiced both before and after the Great War.

The Mormons' history stretches back hundreds of years before the war, the group having settled in the former states of Utah and Nevada[3][4] and locations such as the Old Mormon Fort, the oldest building in pre-War Las Vegas, still exists.[5]

Known as fair traders, Jed Masterson of the Happy Trails Caravan Company mentions that although he is not religious, he has had good experience with trading with New Canaanites, mentioning they are not only fair, but despite their pacifism, they are also keen sharpshooters and will defend themselves.[6][7] Alice McLafferty of the Crimson Caravan Company shares with the Courier that the Mormon traders from New Canaan control the majority of the northern routes.[8] McLafferty had reached out to the Mormons in New Canaan about establishing a branch within their town, and reported they had started to warm up to the idea. She noted that they would impose taxes on the Crimson Caravan that would put them at a severe disadvantage to the Mormon caravans.[9]

In 2281, the Mormon city of New Canaan was burned to the ground and its inhabitants butchered by the White Legs,[10][11] the group of tribals who were tasked by Caesar to ensure the destruction of all of his former legate Joshua Graham's people.[4][12] This was a part of their petition to be absorbed into the Legion and they succeeded in not only destroying the city but also in killing their bishop, Mordecai.[13] The White Legs did not stop there, but instead followed them in their escape, killing anyone who was not fast enough to escape, including children, the ill and infirm, and those who stopped to help them in the process.[12][14][15]

Those who survived the onslaught scattered,[12] with many of them settling in Colorado.[2] A group travelled to Zion Canyon, though all except Joshua Graham and Daniel left before the arrival of the Courier.[11] By that time, the two missionaries are living among the Dead Horses and the Sorrows tribes, actively helping them defend against threats while spreading their faith.[16] The missionaries and tribe members will tell the Courier about their beliefs, including that of souls, salvation, and the afterlife.[17][18]

Daniel will offer to provide the Courier with a book called Scripture, and if they respond affirmatively, he remarks about it being a better response than he usually gets from wastelanders. He will continue to explain why he and Joshua visit the tribes and spread their faith, stating, "that's why we visit the tribes, to spread the good news. For all we know, we New Canaanites may be all that remains of Christ's followers."[19][20] 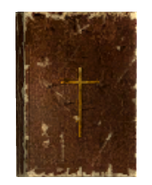 Scripture Daniel gives to the Courier