Fallout 3
“Sure is -- Moriarty's. The entrance is on the top level, opposite the Main Gate. Just be careful. Moriarty is NOT your friend, no matter what he may say, so don't fall for his lies. And for god's sake, don't trust the man.”— Lucas Simms

Moriarty's Saloon is one of the bars in the town of Megaton in 2277.

Established in 2230, it is owned by Colin Moriarty who inherited it from his father following his death in 2241.[1]

This two-story scruffy metal housing with an atrium situated at the highest point of the Megaton crater. The front door opens to the bar. The restroom is under the stairs, concealed by a drape. Drinks are served by the ghoul bartender Gob, and the saloon is also home to Nova, a prostitute who will sleep with the Lone Wanderer if they rent a room for 120 caps.

One can get a discount from Gob, if he is not offended when first spoken to and the Wanderer has good Karma. The discount is 10% off everything Moriarty sells, which includes stimpaks and alcohol. The door behind the bar leads to the storage room containing Moriarty's terminal and the supply of the saloon. The backdoor in the storage room exits to behind the men's restroom.

On the second floor, there are four bedrooms. The first bedroom with a double bed is available to rent. The second room cannot be rented though it has a bed, chair, and filing cabinet. The third room in the corner is Moriarty's room with two chairs, a table with two beers and a squirrel stew on it. There is a bed with a Hard locked cabinet next to it and a metal box in the corner. The fourth and last room has a bed and a filing cabinet.

Regulars at Moriarty's include Jericho, Lucy West, Billy Creel, Nathan Vargas, and Walter. Mister Burke can also be found sitting in a corner, waiting for someone to come along who will do him and his employer a small service.

The cabinet in the storage room has the password to Moriarty's terminal, though it can be gained from Nova with a Speech challenge or the Lady Killer perk. 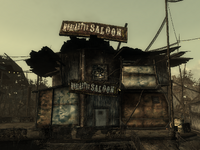