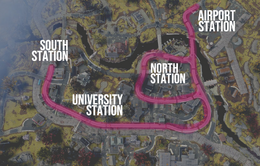 The Morgantown monorail is a public transportation system in Appalachia's Forest region, operational before the Great War.

Prior to 2077, the monorail system served the citizens in the Morgantown area, including those attending Vault-Tec University.[1]

Elevated above the streets on a continuous cement platform line, pod-shaped train cars traversed back and forth while connected to the track below. Several variants of these pods can be found, such as those with bench seats, single seats, or standing room only. The monorail provided service to four stations in Morgantown, connecting several parts of the town to Vault-Tec University.[2]

The line begins (or ends) at the Morgantown south station, curving towards the residential area and then running parallel with the Morgantown Airport. Vault-Tec University station is situated next on the line and heading farther north will lead to a sharp curve directly in front of the airport. The path branches off to circle the north station, rejoining the main line, and sweeping down to the last station at the airport.

Having since fallen into disrepair since the Great War, many sections of the monorail line have been commandeered as makeshift homes. There are six orange pod-like railway cars still sitting upon the track. Where the track itself has broken, makeshift repairs have been made with wood and metal scrap.

The Morgantown monorail appears only in Fallout 76.

This is why we can't have nice things

Retrieved from "https://fallout.fandom.com/wiki/Morgantown_monorail?oldid=3416463"
Community content is available under CC-BY-SA unless otherwise noted.