Morgantown High School is a location within Morgantown, Appalachia.

Following the events of the Great War, the school was the source of treatment and relief efforts in Morgantown, with many citizens seeking help inside the school gymnasium. However, students from Morgantown HS and Vault-Tec University formed gangs and fought for supplies and control of territory in Morgantown, up until the arrival of the Responders in 2082.[1]

Several school buses sit out in front of Morgantown High School. There are four entrances into the building - a front entrance, a back entrance, a side entrance to the south, and an entrance on the roof.

The interior of the building has been decorated for Halloween. However, the skeletons found around the location are not a decoration decision. Various classrooms including a science lab with a chemistry station can be found on the ground floor, surrounding a central cafeteria and kitchen. The cafeteria contains a Port-A-Diner and many festively-colored pieces of crockery. The principal's office can be found south of the cafeteria. It contains a locked safe which can be opened with a key that is found in his office.

The ground floor also contains a gymnasium with a basketball court. There are sleeping bags and makeshift barricades in the gym as well as a door leading back outside. A locked (Picklock 1) door in the northeastern corner leads to a locker room with grenade bouquets rigged to explode above the door. This locker room contains a settler’s corpse, two ammo boxes, and various chems. There is also a small kitchen in the southwestern corner of the gym which contains a steamer trunk.

The upper floor houses yet more classrooms and a teachers' lounge. The floor is divided by a makeshift barricade of lockers which can be circumvented via the many classrooms. A locked (Picklock 0) classroom contains two sleeping bags, a duffle bag and two ammo boxes, and a home economics classroom contains cooking implements such as cake pans and wooden spoons. There is also an office on this floor that contains a locked floor safe (Picklock 2) which is controlled by a locked terminal (Hacker 1) on the desk above. 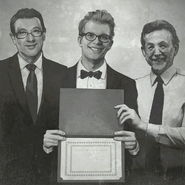 Photograph found in the school