Morgantown is a city in the Forest region of Appalachia.

Situated on the banks of a wide river in northern Appalachia, the city of Morgantown was alive and booming prior to the Great War. The home of Vault-Tec University, the city was a prime stop for many students, hunters, miners, soldiers, and visitors passing through. The city featured a monorail that had stops at Morgantown Airport and Vault-Tec University, as well as two stops at both the northern and southern parts of the town.

People living and working within the city had challenges, though. Some businesses were impacted by new technologies and a changing world that decreased their revenue,[1][2][3] while others suffered from the growth of the local land values that triggered an increase of rent.[4] For the most part, Morgantown was a lively city and continued to be so, even after the Great War.

Following the war, the city was torn apart by violence, chaos, and subsequent death. Some managed to wait out the turmoil, but in time, even the students at Vault-Tec University had to leave after running out of food rations.[5] The city came to be ruled by tribes, torn apart by the squabbling of numerous rival student gangs. These gangs were formed by student survivors that emerged from Vault-Tec University and Morgantown High School, and were led by students from VTU who had been studying to become Vault Overseers.[6]

In the first year, many students died from conflicts between members of the Greek houses.[7] RadAway shortages became commonplace, as time passed without any substantial relief. In particular, one such event was recorded in which a group of male students fought over a cache of RadAway they found and killed one of the students, marking the first death by fellow peer.[8]

At this time, the two leading Greek houses were the Roof House and the Street House. These two houses were differentiated by their territories, with the Roof House ruling from the monorail and roofs of buildings, while the Street House survived among the alleys and streets below, with both bent on destroying the other.[9] The continued onslaught of radiation decimated the houses, causing students and other survivors to lose their hair and skin or just simply keel over dead. It was only with the aid of RadAway that the leading houses were able to maintain control over Morgantown and their territory.[10] In time, a possible truce between Street House and Roof House was suggested after the radiation proved to be too much for them to cope with.[11]

After the Christmas Flood of 2082 nearly wiped out the Responders in Charleston, a group of them, led by Maria Chavez, returned to Morgantown Airport, claiming it as their headquarters and setting up a tent city and other facilities across the tarmac, to perform triage and provide aid for the surrounding area. A member of the group, Sanjay Kumar, managed to set up a Protectron to patrol the streets and three locations with supply caches,[12] along with modifying the machinery inside Mama Dolce's Food Processing to manufacture canned food.[13] Morgantown's proximity to the Mire allowed for trade with Harpers Ferry to develop, aided by the Appalachian Brotherhood protecting the passage through the mountains out of Grafton Dam, at least until they were forced to pull out.[14]

In 2097, despite all their efforts, the Responders were wiped out by the Scorched. By 2102, the only inhabitants of the city were feral ghouls and the Scorched.[Non-canon 1]

The city has a large amount of loot, both notable and junk, spread out through the old campsites, buildings, caches, etc. There are a few workstations hidden through the city, although most of them are on the rooftops, which can only be accessed by climbing stairwells and fire escapes, parkouring from the monorail tracks, and various combinations of the two. Two daily events, Back on the Beat and Feed the People can be completed every 24 hours for various items and experience. Specific locations within Morgantown include:

Morgantown was one of two locations available as a map in the Nuclear Winter game mode.

Back on the Beat
Responders stash M-1
(Delicatessen)

Back on the Beat
Responders stash M-2
(Attorney's office)

Back on the Beat
Responders stash M-3
(Bank)

Back on the Beat
Back of stash M-3 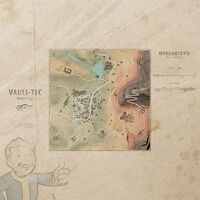 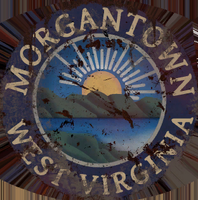 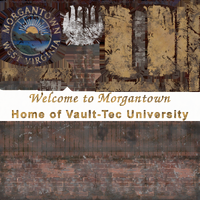 The Battle of Morgantown

History of Morgantown: Vol. I

HR meeting minutes, in the desk

In memory of books, in the safe

Tear it all down