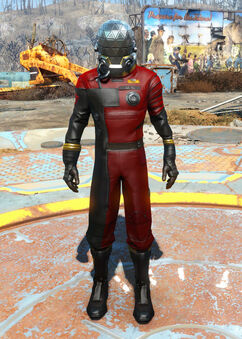 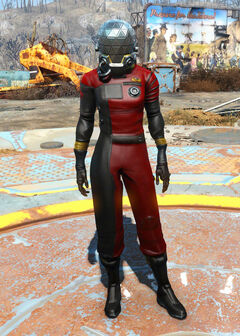 “From deep space to the Glowing Sea, this space suit - once worn by TranStar Industries' Morgan Yu - will help turn you from prey to predator.”— Store description

As the name states, Morgan's space suit is based on the TranStar spacesuit worn by Morgan Yu, the protagonist of Prey (2017). The suit sports the same coloration and helmet design, right down to Morgan's “M. Yu” name tag.

The space suit, while similar to previous iterations of the space suit, takes on much more of a resemblance to the REPCONN Aerospace space suit, at least in the red and gray color scheme. The suit itself has a Prey Psychoscope closed helmet, a black collar piece and tubing. From the neck down, the right side of the suit is adorned with the red Transtar logo, black air tube pieces and a zipper that nearly stretches all the way down to the suit's boot. The exceptions to the majority black coloring on the right side is the gold cuff-link for the heavy black gloves and the red shoulder and Transtar logo.

The rest of the suit, from the neck down, is a red color, with a gold Transtar ID tag, the iconic "M. Yu" nametag and black striping decorating the top left arm and shoulder, with the exception of the completely black gloves. The left breast is adorned with a small circular piece. The torso has a belt-like decorative stripe, with two rectangular buttons on the left side. The left kneecap is covered by a three-buttoned pad, and ends the ensemble with heavy black boots.

[platforms tag needed] Addition to the inventory only works for the FIRST new game after the content is installed. In new games after that one, the space suit is MOST conspicuously absent.

Retrieved from "https://fallout.fandom.com/wiki/Morgan%27s_space_suit?oldid=3068320"
Community content is available under CC-BY-SA unless otherwise noted.