W05_Wayward_Mort
“Overall, though, being a Ghoul, mixed bag. Can't say I'd recommend it as a lifestyle choice.”

Mordecai "Mort" McCoy is a bar patron at the Wayward in Appalachia.

On the day of the Great War, Mort survived by hiding in the back of a truck, recalling that was like being in a hurricane.

An avid explorer, Mort has visited most locations in the Forest and has figured out how C.A.M.P.s work. He is a good source of insight on both of those topics. Describing himself as an "independent operator," Mort is often hired whenever people need to go through radiation to get something. He is a frequent patron of the Wayward and a friend of Duchess, helping her when she needs assistance while racking up his bar tab at the same time. However, because of the help he provides, she grants forgiveness for his tab.[1] He also mentions paying a visit to WV Lumber Co. some time ago to find the place was originally crawling with super mutants.

After speaking to Duchess about dealing with the group that Batter belongs to, Mort can be spoken with to offer some holotapes on C.A.M.P.s he put together to help out the Vault Dwellers, especially if the player characters are just fresh out of the vault from being created and completing "Reclamation Day." He also mentions that, due to his ghoul physiology, he's able to head into irradiated areas safely where others like them due to their human physiology would, as he put it, soak up so much radiation that, "they'd be as cooked as a TV dinner."

Mort appears only in Fallout 76, introduced in the Wastelanders update.

Mort sitting at the bar inside The Wayward 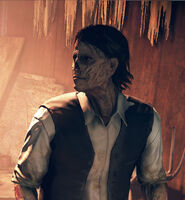 Mort being held hostage by the Free Radicals